In the Studio with Isis Davis-Marks

In the studio with Isis Davis-Marks, whose work uses different media and she’s especially interested in how her personal experiences relate to politics and philosophical theories. We met with Isis to tell us more about growing up in New York City, their greatest influences, and unexpected sources of inspiration.

I think that I’ve always seen myself as an artist: For as long as I can remember, I’ve been making things with my hands. When I was a child, I used to make a lot of pocketbooks out of paper, and my great aunt taught me how to sew on a machine when I was around five years old, so I began making clothes, pillows, and blankets at a young age. I also took painting and drawing classes at places like the 92 Street Y and the Art Student’s League throughout my adolescence.

In spite of my early exposure to art, I didn’t think that I’d pursue anything artistic as a career until recently.  However, when I went to college I decided to take a drawing class during my freshman year. My great grandmother died around this time, and I found that spending time in the studio was something that invigorated and inspired me—I appreciated that art making felt more intuitive and physical than my written coursework. I liked to supplement my academic research with studio time; it felt like a balance between the body and the mind or the Apollonian and the Dionysean, in the words of the German philosopher Fredich Nietzsche. I feel that I’ve maintained a studio practice since then, and I see art as a way for me to work through issues like ancestral communication, archival research, and personal experience.

I was born and raised in New York City, a place filled with visual art and cultural institutions. I feel very lucky that my family introduced me to art when I was a child—I’ve been going to museums, galleries, and cultural events in New York since I was an infant. When I was a child, my grandfather also took me to museums around the city including the Metropolitan Museum of Art, the Met Cloisters, the Frick, the Guggenheim, the Whitney, and the Museum of Natural History. My great aunt was also a collector, so I also had art in my home. And my great uncle played for this avant garde jazz band called Sun Ra. I have a half sibling, but I grew up as an only child, so I also spent a lot of time alone making things and looking at content on the internet, which influenced my aesthetic because I often blend text with images, something that is very endemic to internet culture.

Even though I grew up immersed in images, I didn’t consider working in the arts because the art world was still very white and rich, so I didn’t think that I’d ever have a job within it. I grew up with a single mother in the South Bronx, and I went to public schools until college, so art school seemed like it was reserved for rich white people on the Upper West Side—not me.  However, around 2014 or 2015, movements on the internet like the Art Hoe Collective made me realize that it might be possible to make art into my career, and conversations about accessibility made me feel more hopeful that the art world would become more democratized. I try to prioritize things like racial and gender inclusion in my work, and I also try to make it as intersectional as possible.

As I mentioned in the previous question, I feel that art has always played a role in my life, but certain events definitely called me to spend more time on art making. I think that many of the classes I took in college helped me see what it was like to have a studio practice, and I continued to follow my passions from there. I also began freelance writing for Artsy after college—having a job in the art world certainly helped me become immersed in it and encouraged me to continue making work. 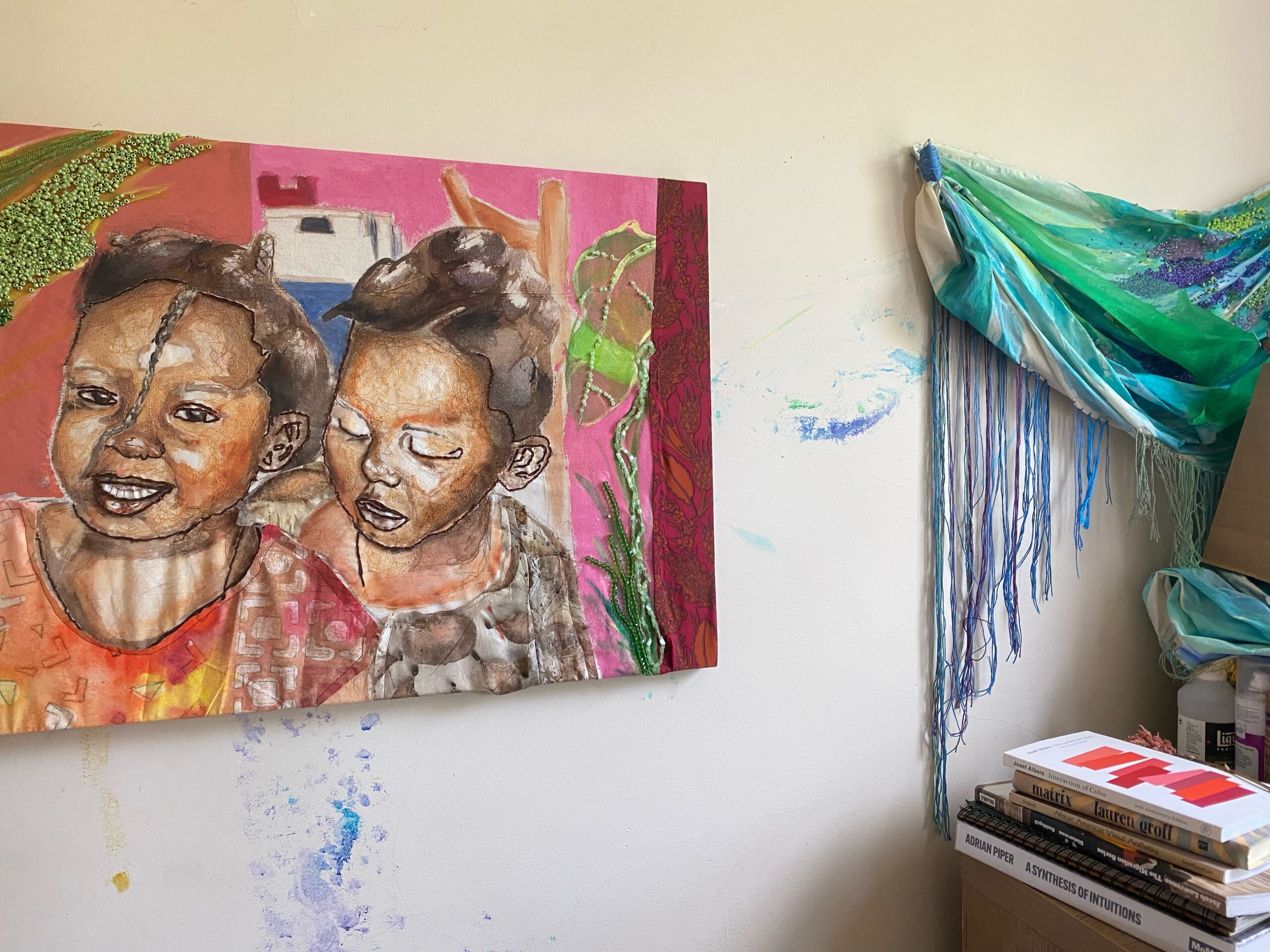 I think that my work often blends personal narratives with wider political themes. I used to make my work more overtly political, but I feel that my pieces became more introspective during the pandemic, and I began to focus more on objects and people around me. I feel that as a Black artist, my work is often racialized even if I’m not necessarily trying to do that, which is also why I make abstract pieces, landscapes, and still lives in addition to portraits. My aesthetic is layered and multimedia, as I often incorporate different materials and textures into my work. 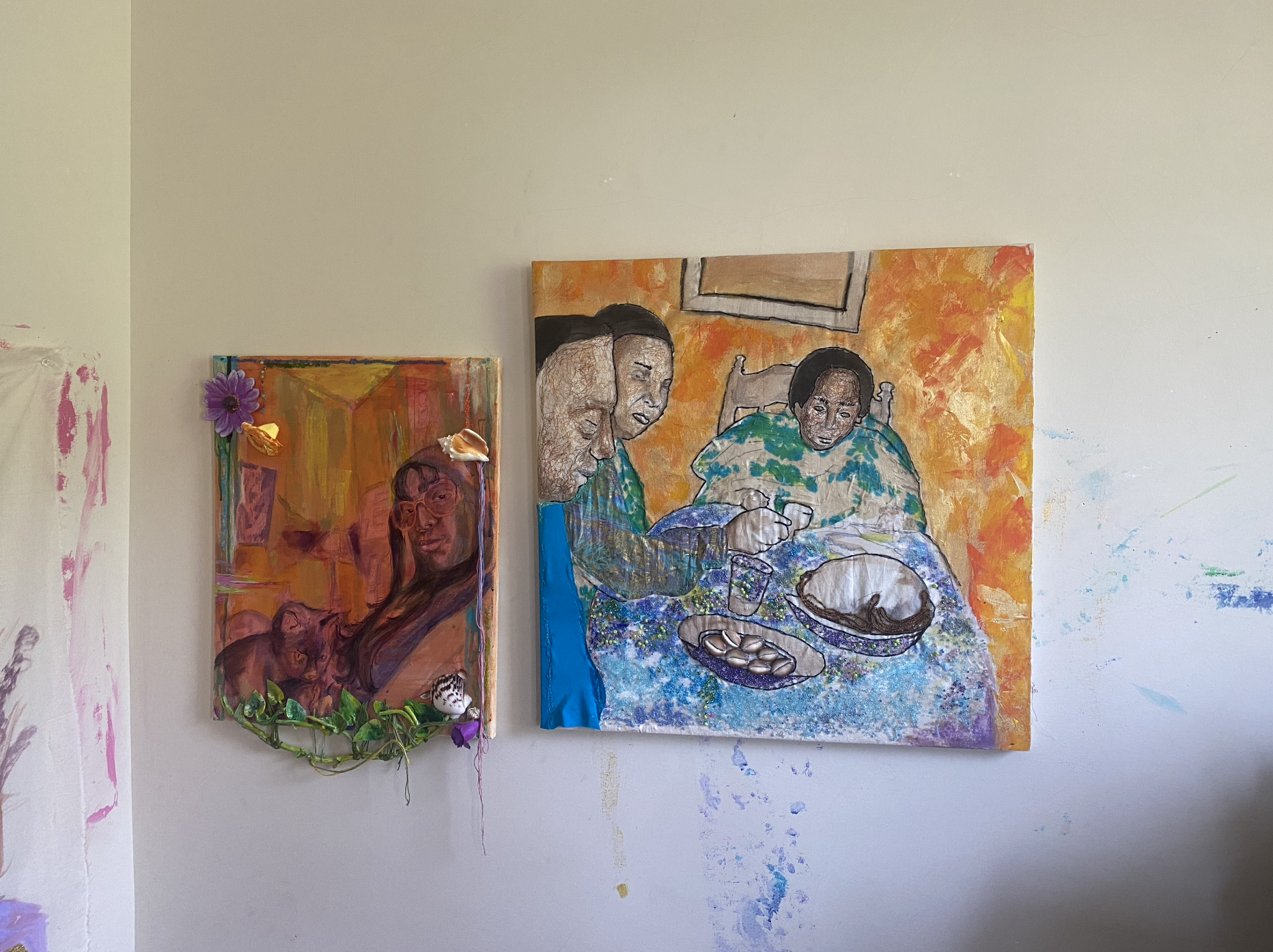 I’m also an arts writer, so literature is a big source of inspiration to me. I mentioned Nietzsche earlier, but I also like reading Egyptian and Greek mythology, and I think that the Orestia is one of my favorite Greek tragedies. I’m also inspired by various stories from religious texts like the Bible and other oral histories from the Yoruba tradition. In terms of more modern literature, I like the imagery and sensory details in the works of Toni Morrison, Jean-Paul Sartre, Zadie Smith, David Foster Wallace,  Zinzi Clemmons, Elif Batuman, Ottessa Moshfegh, Joan Didion, and James Baldwin. I also like listening to gregorian chants—this may be a more unexpected source of inspiration.

I believe that art is about visceral experiences. We often have physical reactions when we feel things. I try to tap into this with my visual practice. I want people to become fully immersed in a scene or alternate world when they view my work, which is why I make it so tactile and multisensory. I try to use formal techniques involving color theory, sewing, composition, and brushwork to achieve certain effects.  I’m interested in pushing the boundaries of what does or does not get considered fine art, and how what we consider “art” is often influenced by racial or gender markers. I think that I’m aware that an audience exists when I’m making work, but I do feel that I’m at my strongest when I’m unconcerned with an audience.

I feel that the past three years have drastically shifted how I view the world—the pandemic forced many of us to change the ways that we interact with one another, and it also highlighted the ways in which we are dependent on others. This event made me more introspective and more comfortable being alone, which helped me to spend a lot of time in the studio by myself and hone my current practice. It also made me reflect on themes like globalization, public health, and essential work. I also had a string of family deaths during this time, so I went through some personal changes as well, which made my work become a lot softer and more attuned to interpersonal relationships as opposed to grandiose statements. I began to look inward, to process how these things were affecting me. Other major events like 9/11, the 2008 recession, and the death of George Floyd  have also had a profound influence on my work, and I think it’s impossible to separate contemporary art from the social and political context that we live in. 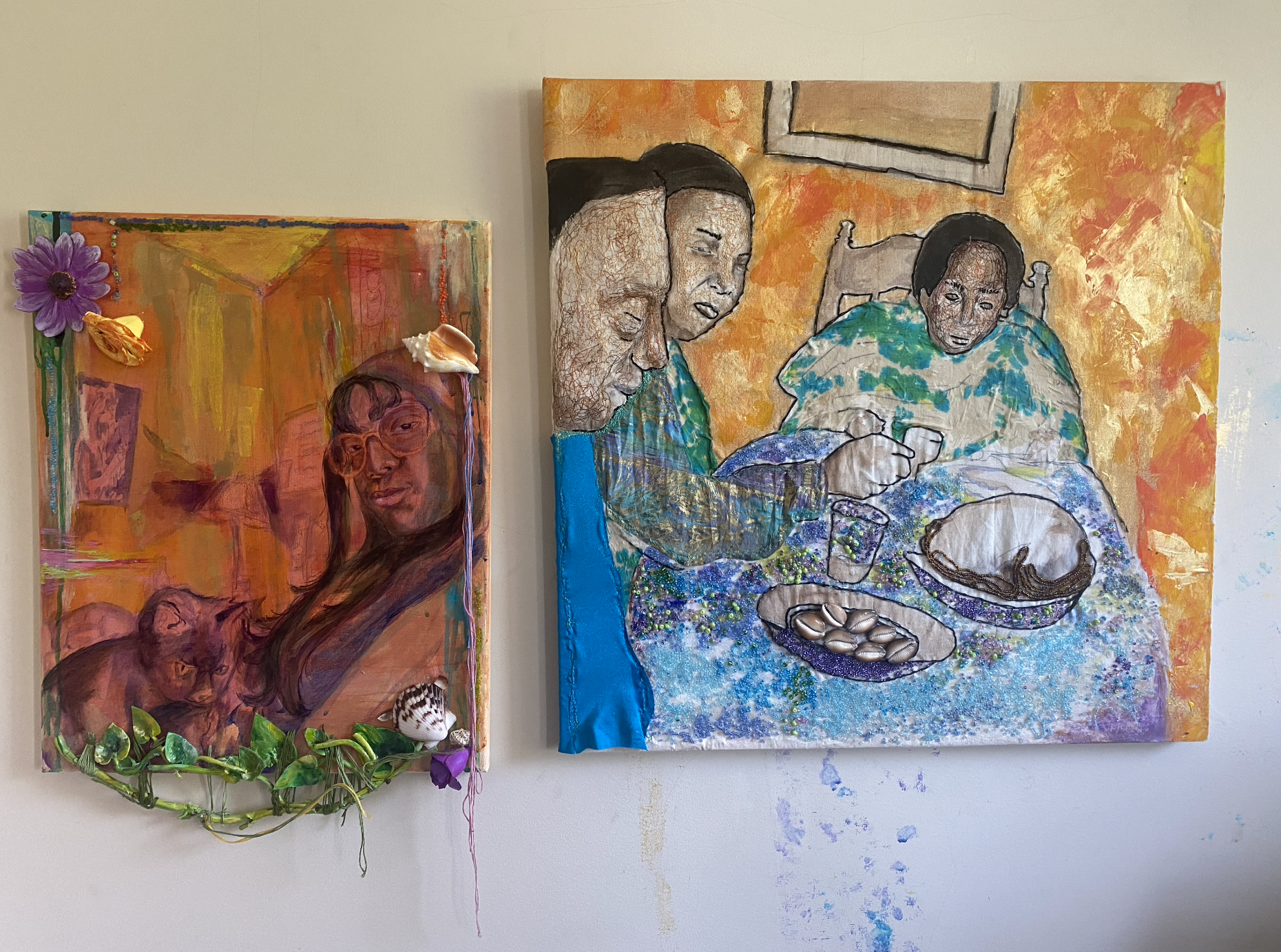 I need the time and space and energy to make a good piece of work—I think that we’re living in an era of hypercapitalism and that we’re constantly expected to produce things, but I also believe that rest is important and that good work takes time. Finding a work/ life balance is something that I’m still striving towards. I feel that I make my best pieces when I’m able to readily react to my emotions and make work for myself.

The piece “My Mother Reclining” draws from photographs that my grandfather took before he died.  I’ve been working on a body of work after his death, and I’m trying to draw from both familial and historical archives to create a series of objects, paintings, and installation pieces to tie his death to broader ruminations about grief, societal mourning, and African funerary practices.

I want to make video work in the future! I’m also a writer, and I care about music a lot, and I also love lighting, so I think that video work would be a great way to combine my myriad interests.