In the Studio with Igor Chan

At first glance, isolation is omnipresent in Chan’s work. His iconography is cropped from the minutiae of daily urban life: the lower half of a roadside tree, a window with masking tape, a ghostly phone booth. However, unexpected community emerges upon a further look. To see Chan’s tree as orphaned is to ignore its family of roots. To see Chan’s window as solitary is to ignore the building it is part of. To see the phone booth as isolated is to unsee the dormant cityscape that embraces it. Chan renders the intricacies of the part to illuminate the pathos of the whole.

In Italo Calvino’s Invisible Cities, Marco Polo describes a variety of fantastical cities for his host, Kublai Khan. Eventually, Polo confesses that he is actually describing one city: Venice. Similarly in Chan’s work, his subjects may stem from different sources (ranging from Canada to Germany), but his works often result in reappraisals of his home of Hong Kong. This repetition of intent not only reflects Chan’s love of the city, but perhaps the specific type of Chinese love known as 不捨, which translates to the unwillingness to let go. It is the indelible relationality between objects, interpersonal relationships, geography, and time that forms the emotional groundwork of Chan’s paintings. We had the pleasure to hear more about his practice.

Paint us a picture of your artistic journey.

I started painting in elementary school. I continued painting for ten years, so it was a natural progression to continue studying art in college.When I did my graduation work, I would draw my subjects according to scale and imitate even the tiniest of details. But then I began to question myself: why do I need to adhere to verisimilitude?

My current practice begins with taking inspiration from images. The way I see images is that it presents a secondary reality. The proliferation of media and technology has made it challenging to approach subjects through a primary source. I began to accept painting as a way to communicate with this struggle, almost like depicting a tertiary reality. What you see on the canvas is a world that belongs to me, created by me.

What does the idea of  ‘tertiary reality’ add to or subtract from the painting?

A heightened sense of readability is added to the painting. I try to make the primer and the underpainting apparent in my work. I will even deliberately leave certain spaces blank to allow the painting to breathe. Painting is different from photography in the sense that the process is visible. I don’t consider the blank spaces to be a loss. Every choice I make gives new information to the painting.

I’ve often wondered that given the intense climate of 2022, painting can seem like a frivolous task, especially within the context of Hong Kong. But this thought has inspired me to demand more of myself when I start a new work: what am I actually doing? What is actually the purpose here? 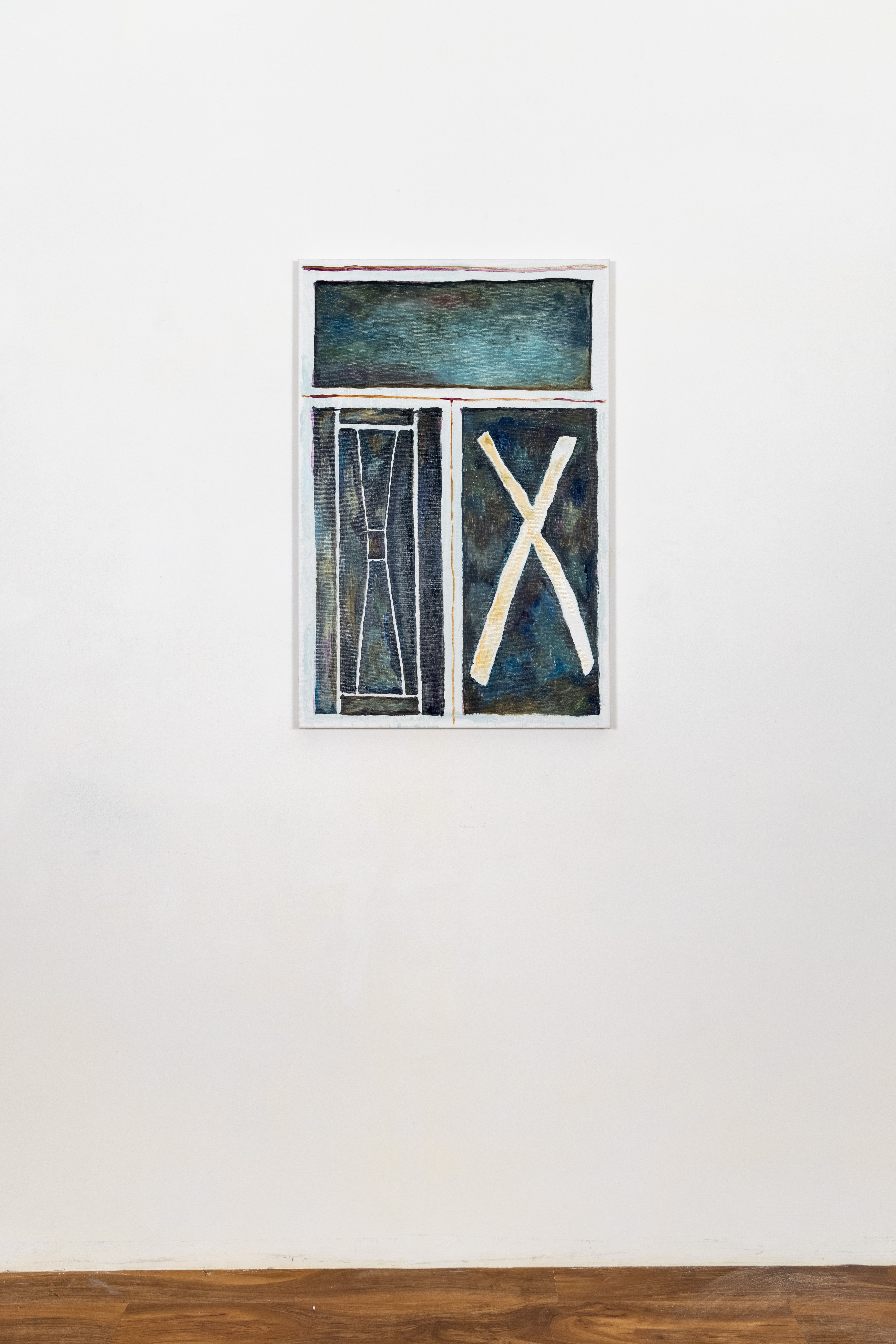 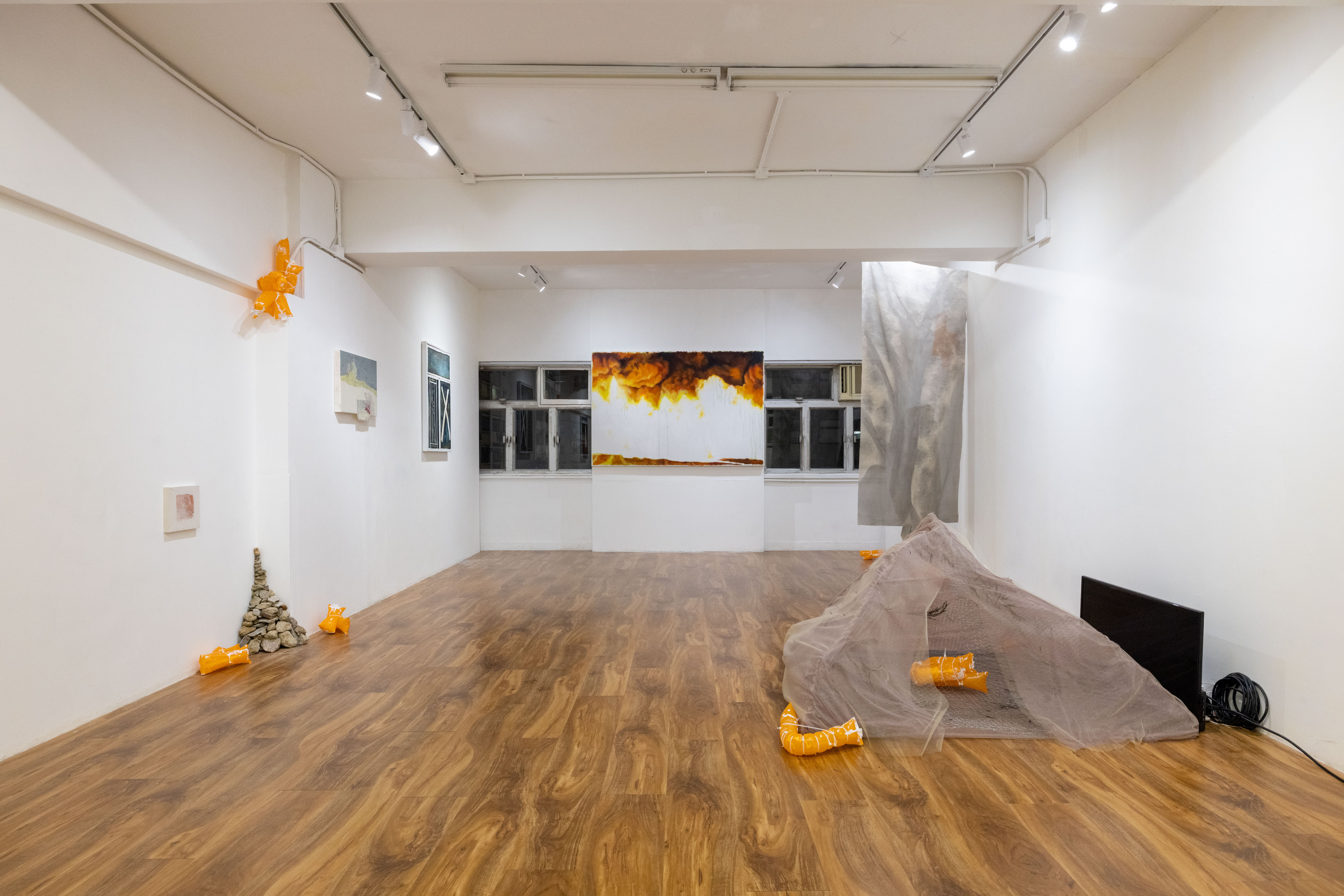 You mentioned briefly that you stopped working briefly after 2020. How have these recent years changed your idea of painting, or art, as a whole?

Before 2020, I cared a lot about how audience members received my work. When I was getting my degree, I felt that my work was defined by institutional standards and deadlines. My graduation thesis was based on the argument that art is useless, which my professors were rather depressed by. So there was a moment where I completely lost confidence in art, but I felt a lot more at ease after graduation, which shows in my work. I had the space to truly feel what was around me and to understand the direction my taste was leading me towards.

It was also a liberating moment when I realized that art is a very selfish activity. At the end of the day, art satisfies my own needs, rather than fulfilling the desires of an audience. Now, I think that a painting is finished when I no longer have the urge to carry on.

Where does your inspiration come from?

My inspiration used to come from conversations with friends, and I would be struck by a certain topic or incident that was mentioned. Now, my inspiration comes from a more proactive place– my own observations of daily life. I like to scout for things I see on walks that carry an uncanniness. The objects we see in daily life may appear to be innocuous, but there are a lot of inner tensions that escape the eye. I like to figure out what qualities trigger me. Painting is a way for me to enlarge and inspect these ‘triggers’. I enlarge my subjects so that the viewer cannot avoid what they’re presented with. 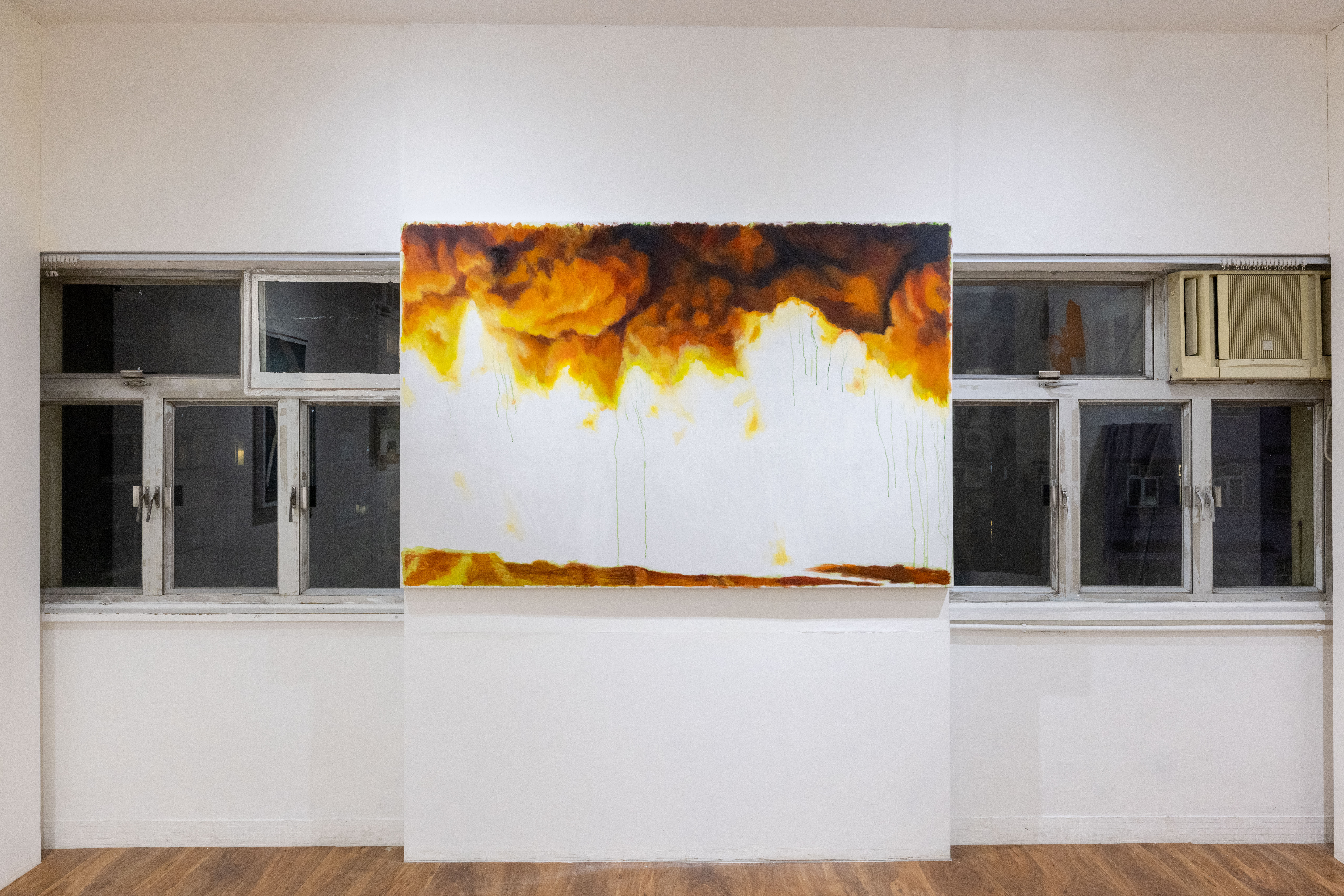 The interpersonal tensions you are exploring exist below the surface of the everyday. Why are you drawn to depicting objects rather than human figures? What are the tensions embedded in the inanimate?

Even though you don’t see human bodies in my work, every object is human-made, or contains some trace of human activity. The inanimate is the residue of humanity. Painting objects allows me to explore interpersonal tensions in a more subtle way. It’s like what I mentioned earlier about secondary, or even, tertiary realities. It comes from a similar space of working outside of primary sources, since they are so elusive in a technology-saturated era.

Who are the artists who have made a significant impact on your work?

I’m inspired by Edward Hopper. I’m drawn to how he creates atmosphere through the negative space between subjects that is specific to cityscapes. Even though there is a great attention to deliberate emptiness in his work, there is a sense of suffocation that I can’t find in other artists’ work.

I’m also really inspired by my contemporaries, my friends in Hong Kong who are practicing artists. I think it’s because I’ve been in contact with them the most, whether it’s through conversations or their own exhibitions, so I always learn from them. I really appreciate being a part of their community. 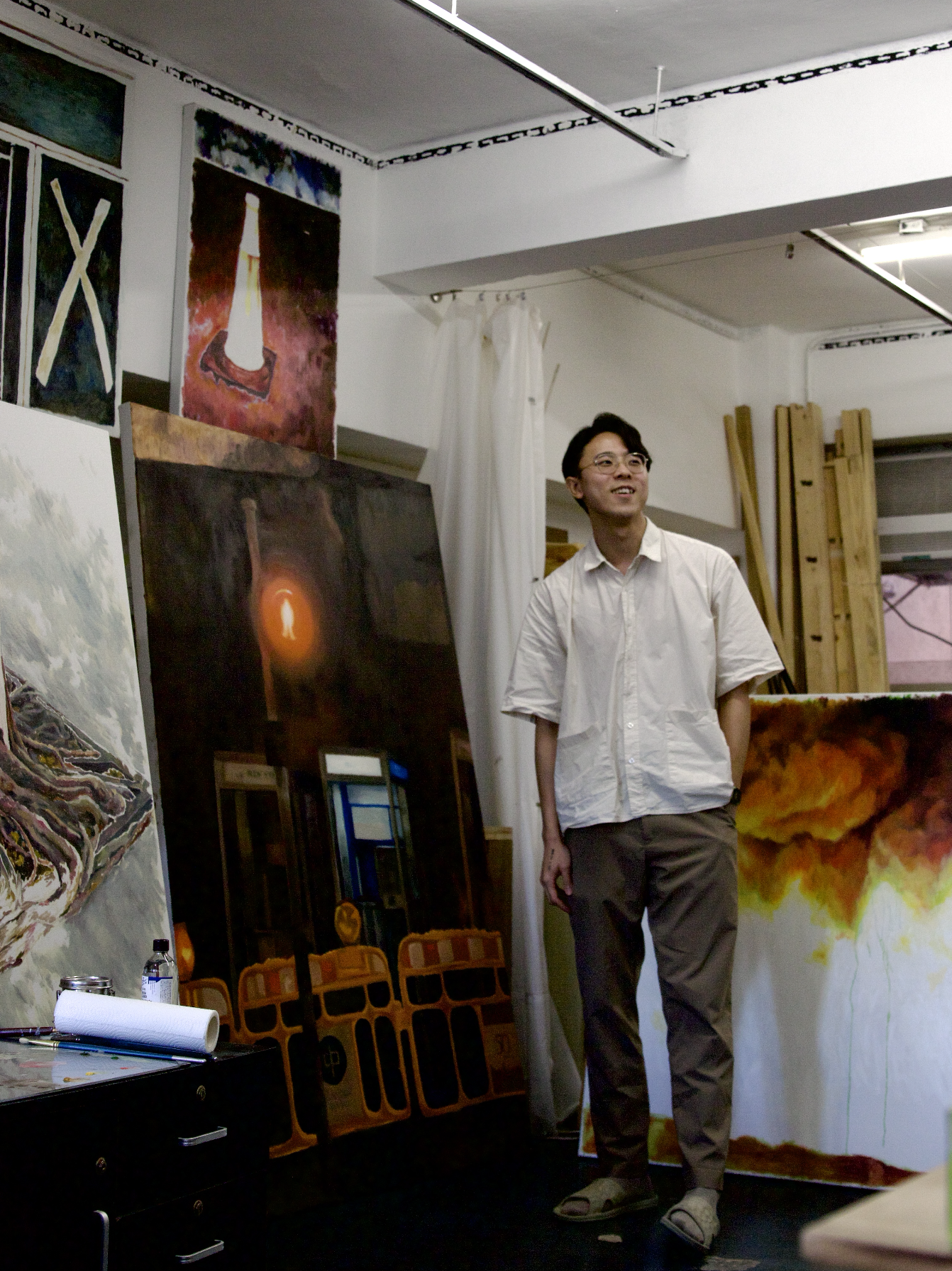 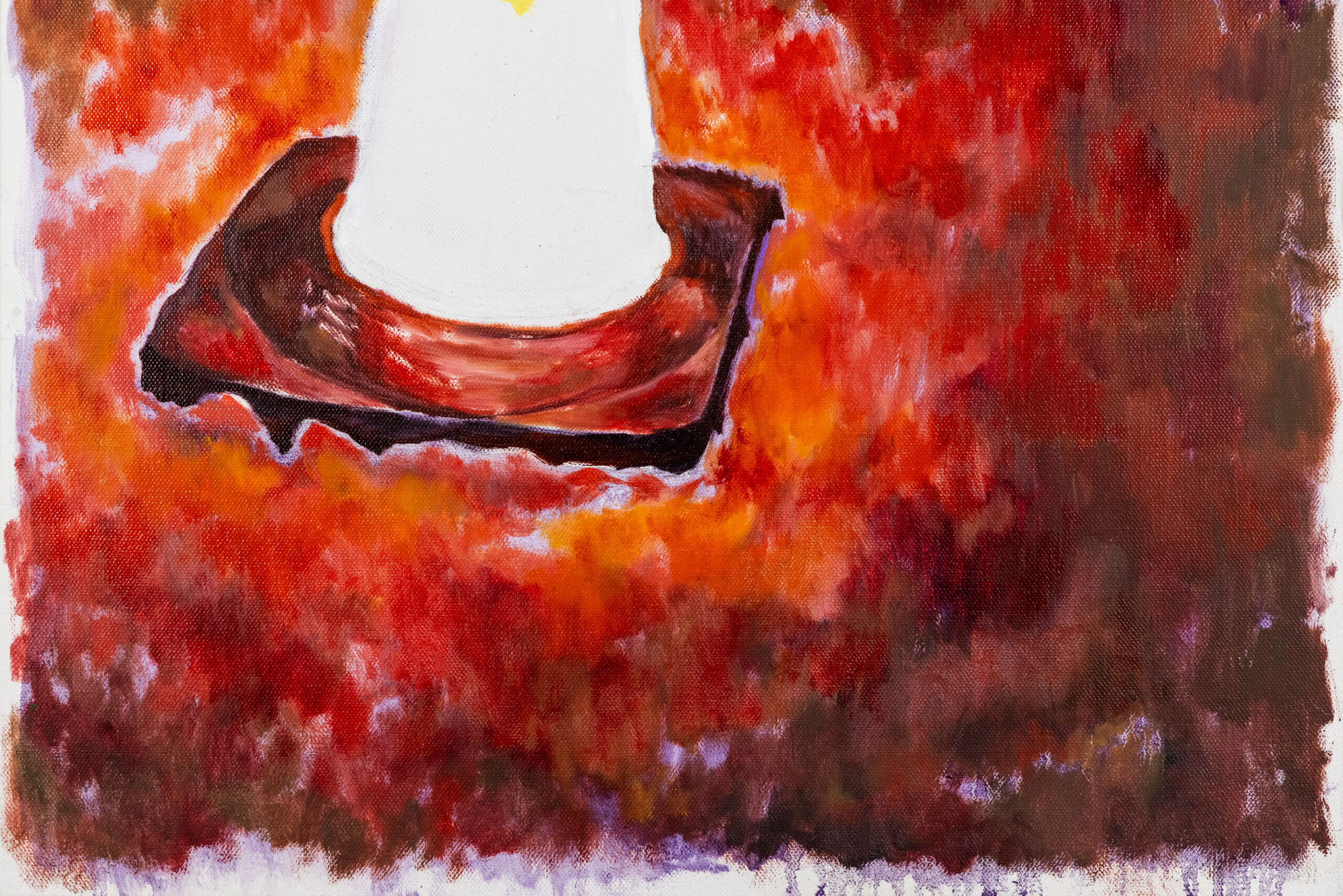 Your work draws heavily on the present moment. Is this direct confrontation with what’s going on in our lives taxing? Have you considered taking inspiration from history instead?

I’ve always thought that the life of an artist is very long. In other words, I don’t know how my work will evolve in thirty years. For now, I just want my paintings to be a document of what it’s like to live through the “now”. I aspire to create an archive of the eras I’ve lived through so future viewers can look back at our times one day.

Tell us about the inspiration behind some of your consigned works.

Heat is inspired by a picture I found in a local newspaper, but I have deliberately created the painting outside of its temporal and geographical context. The image you see in the painting can be the bonfire at a beach or a festival. My goal was to capture a fervent energy, using a neutral perspective to approach the controversial subject in the original picture. I didn’t want to use a didactic, superimposing voice. Instead, I wanted the audience to tell me what they see. I’ve also included a lot of white space in the painting. To me, the absence may even speak louder than what I’ve filled in. The things we can’t see often resonate stronger.

I Haven’t Said Goodbye Yet  is inspired by my friend who moved to Germany in 2019. He took a picture of a phone booth in Germany and sent it to me. I’ve started painting phone booths since my undergraduate studies. The phone booth is an icon in Hong Kong’s streets. Even though it is still present today, it is also an expiring icon because no one uses phone booths anymore. To me, the phone booth represents a space of forgetting and neglect. I like to imagine who would still go to a phone booth, and why would they even go there in the first place. This painting investigates the difficulty of human connection, and the barriers that separate us across space. I find it fascinating how phone booths serve as a bridge of communication, but also feel so isolated in their box-shaped, Hopper-like structure. 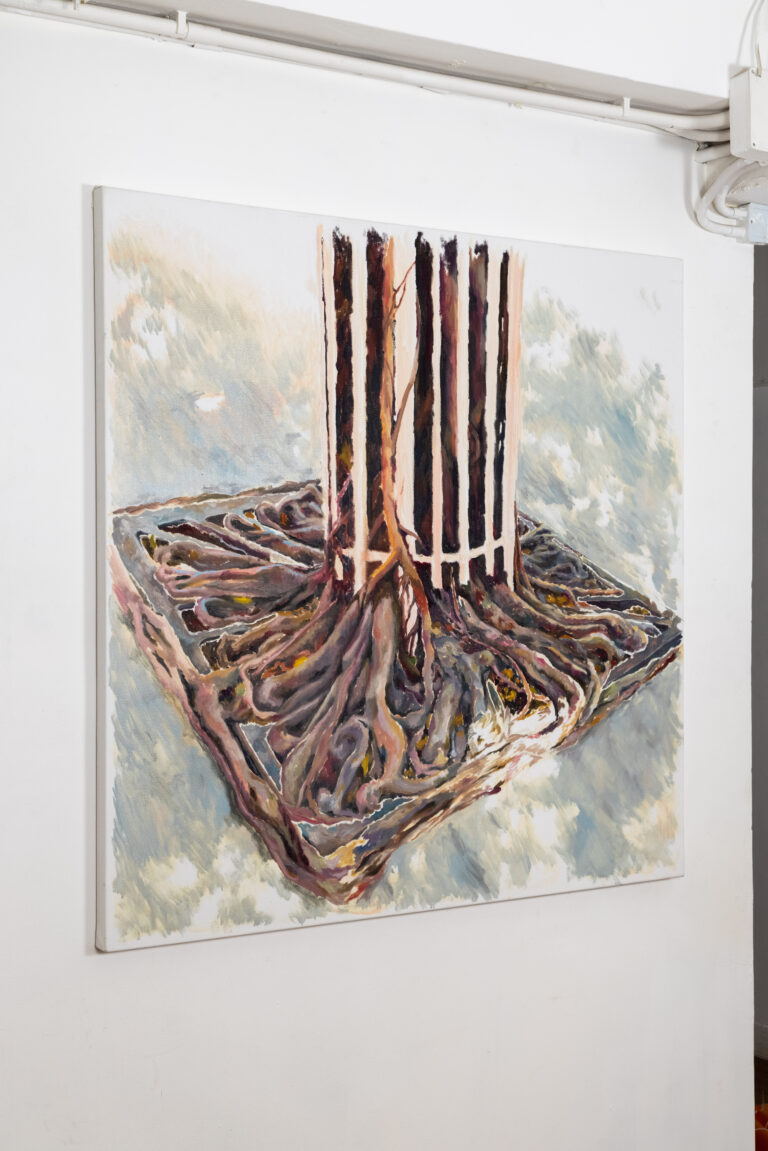 Have you always been a romantic?

No! On the contrary, I always tell my friends that my paintings lack an emotive quality. My friends tell me otherwise, but I don’t feel that way because I paint in a very straightforward, rational way. But maybe I am a romantic subconsciously.

If there’s any artist you could have dinner with, who would that be?

The first would be Tehching Hsieh. I’ve admired him since college, especially how he pushes himself to the extremes in performance pieces. His work is radically different from mine, but I would love to know how he does it.

I would also like to have dinner with Samson Young. He is such a versatile artist, unlimited to any medium of expression. I met him once in college. I think I will learn a lot from him not only because he is also a young artist from Hong Kong, but also just because he is a remarkably fun and intelligent person.