In the Studio with Yaya Yajie Liang

In the studio with Yaya Yajie Liang, a visual artist whose work are studies on momentary sensation, perception, storytelling and material. We met with Yaya to tell us more about growing up in China, what inspired them to first pursue their artistic journey and unexpected sources of inspiration.

I have had a strong attraction to painting since I was 2, or 3 years old. At my home in my hometown, I still have my first work – a lot of graffiti on the walls. I have been painting and drawing for most of my life. For me, there is a certain physical and psychological urgency to the act, just as insects adjust to their external environment, changing the texture of their skin, and their state of being. I regard making art as an act of reconfiguring my own interior by perceiving the coding of the external space and producing a new universe of reference again. It is an autopoiesis system.

I was born in China and spent my childhood in a tiny city in the central region. It was very far from the so-called mainstream art world. Interestingly, both my parents were painters whose work focused on traditional Chinese painting and Western realist painting, respectively. At a very young age, this allowed me to enter into a dialogue between art that emerged from the different philosophies of the East and the West. One captures the representational world in wireless detail, and the other sees the external world as a reflection of one’s inner self. These two different universes meet irregularly in my practice. Together they build the way I see the world.

I think my practical journey to date has been driven by a desire for ‘an escape from the norm.’ In my youth, I moved to Beijing, where I was taught a very formal realist painting technique, which requires the painter to abandon subjectivity and aim for a realistic imitation of the surface of things. I always kept the question within me in such a practice: where am I? The self seems to be lost in space. Such doubts pushed me to escape from the realist standard and develop a system outside of it that was mine, which meant returning to the origin of the axes. Subsequently, I completed my MA at the Royal College of Art, and still continue my Ph.D. there. Even though I am in London, the city that is the center of mainstream art globally, I still place myself in a liminal position, in a good sense. The escape at this time is more concerned with how to disrupt the forms already established in painting and how to avoid ineffective repetition. I hope that my practice will produce something unrecognizable. Not a copy, but an interruption and displacement, a distortion. 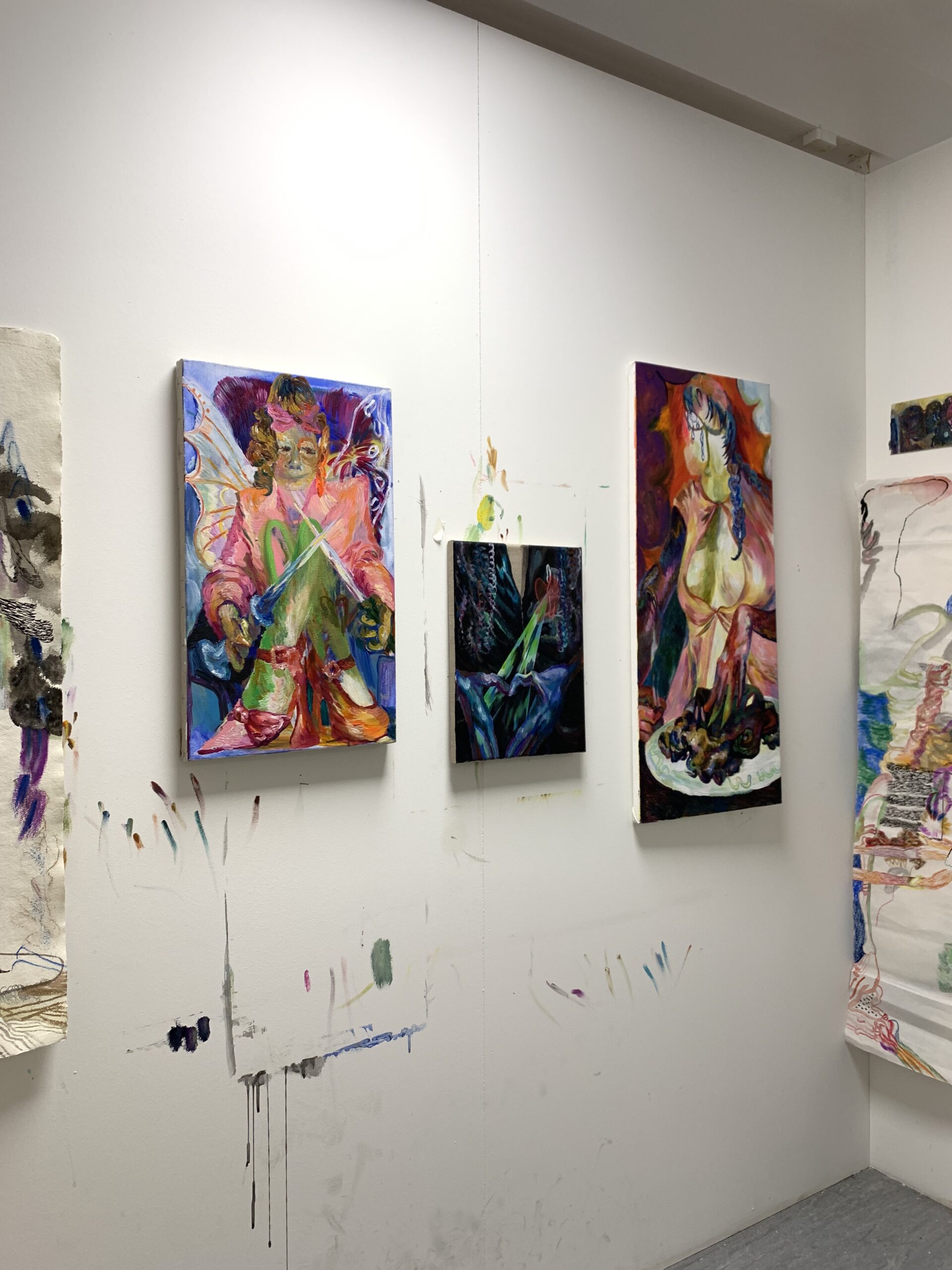 My practice revolves around ‘ animality’ by crossing the humanist boundary between humans and animals. This word, which in common sense is only associated with non-human animals, seeps back into the texture of humanity in my paintings. The standard language is the basis for a social contract. Deleuze and Guattari’s philosophical idea of ‘becoming animal’ has influenced me greatly. By distorting the metaphors of social values and hierarchical order, my work dismantles the symbols and meanings previously attached to humans or animals. By deforming metaphors in social values and hierarchical orders, my work dismantles the symbols and meanings previously attached to people or animals, disrupting the definition of the ‘ideal’ human being and dismantling the dominant position as complete subjects. Thinking with animals means assigning the subject of thought, creating an assignment of states or a plurality of centers to evaluate, select and mark /create a world. 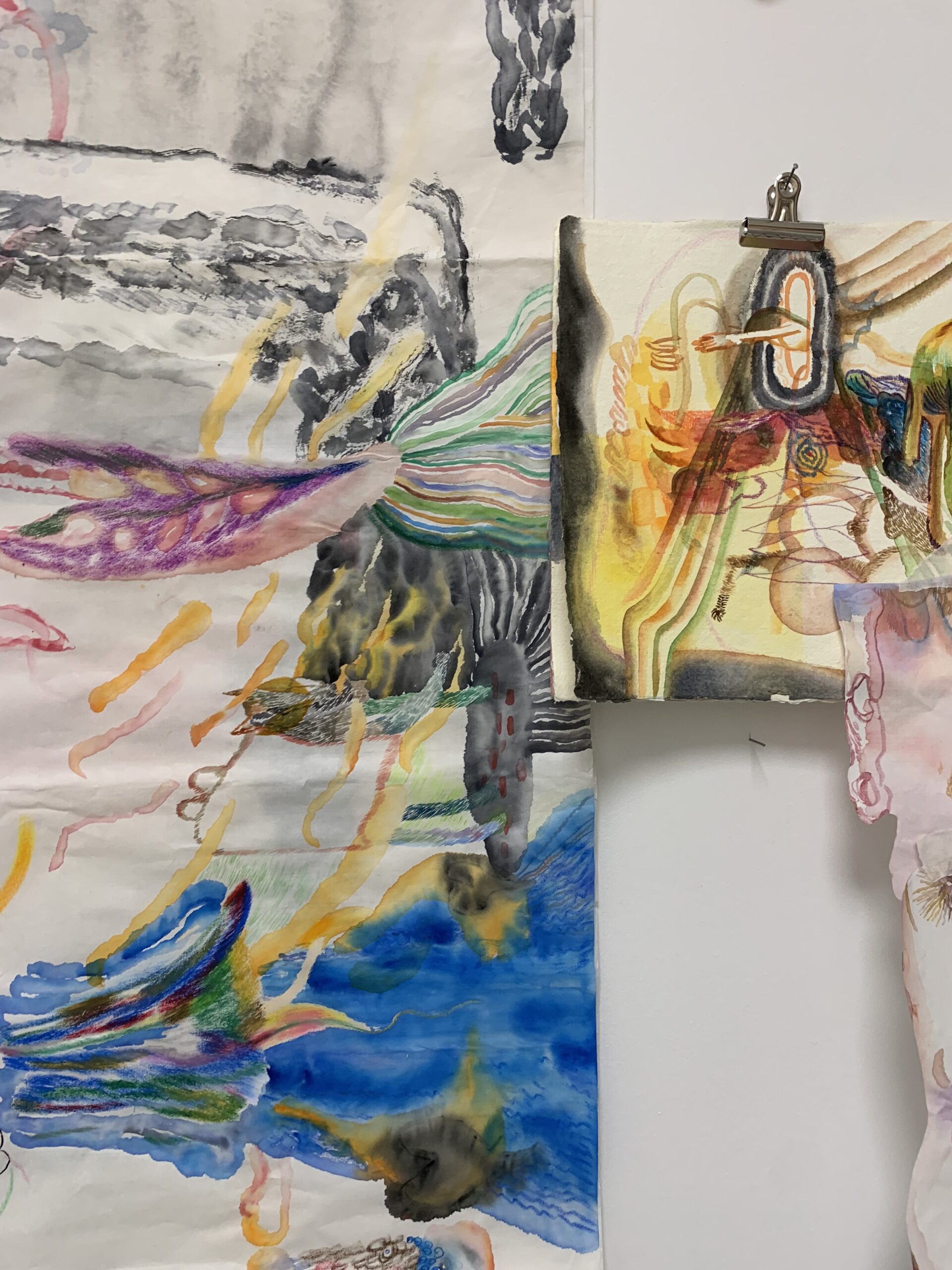 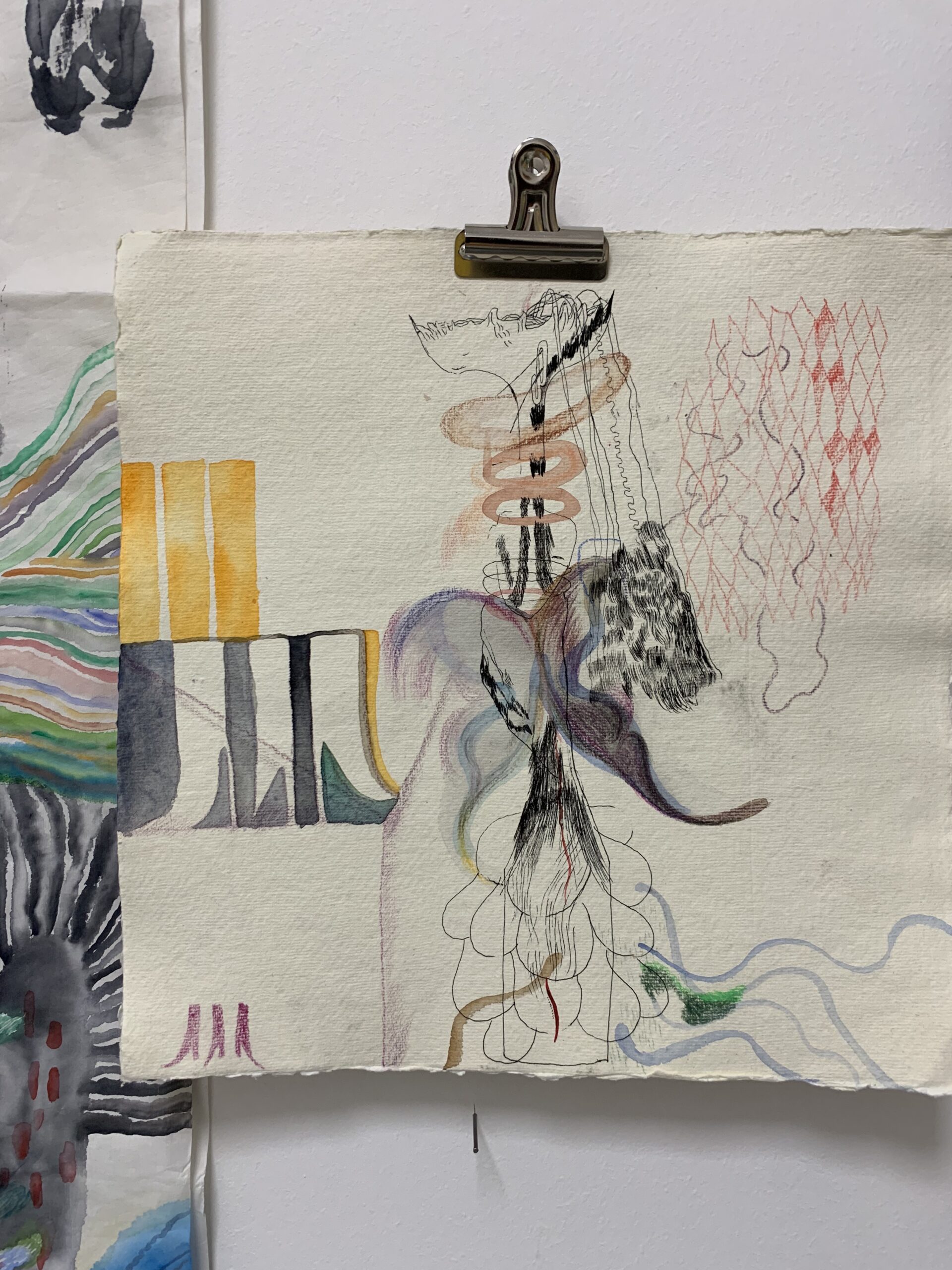 Philosophy and literature are crucial to my creative work. I read a lot of post-structuralist philosophical theories, such as Gilles Deleuze and Félix Guattari’s ‘rhizome’ and Jacques Derrida’s ‘animal other.’ I see these ideas as a body by using these bodies to think about how to construct paintings. The literature of Jorge Luis Borges and Calvino expands my imagination in another sense. For example, in The Invisible City (1972), Italo Calvino tells us, through the mouth of Macrobius, to travel to return to your past or to find your future. This eccentric view of time helps me break the linearity of time in my paintings.

I am also interested in the hybrid creatures of the furry fandom, a posthumanist subculture that combines fetishism and bestiality. This direct transformation of sexual partners into animals, especially furred ones, to stimulate sexual desire expands the abyss between the human and animal worlds. This hierarchical order truly makes the animal a stuffed animal, which is forced to participate in a drama that satisfies human emotions. 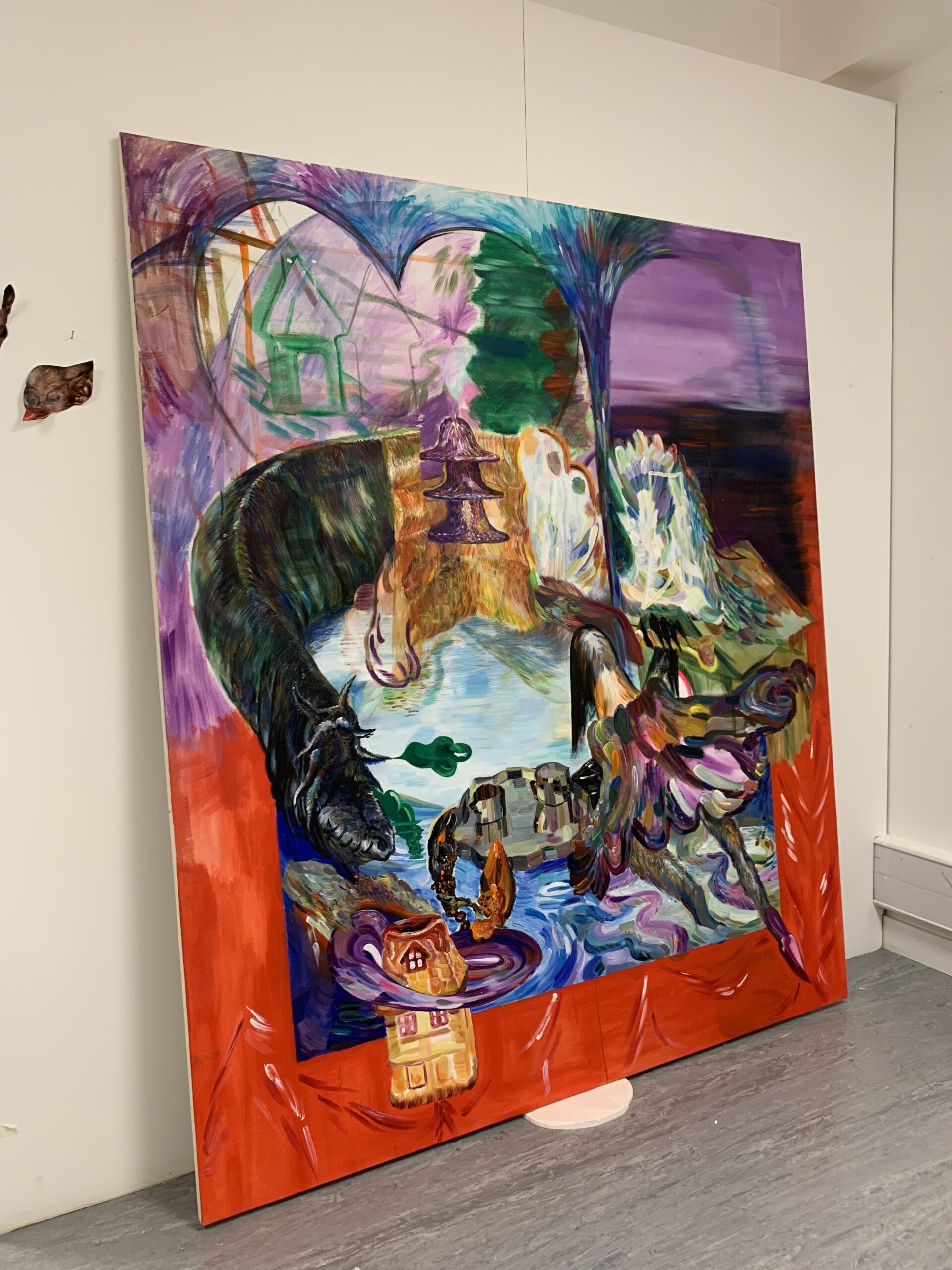 I do not set a specific audience for my work. As an artist, I want to create an inter-constructive
relationship between the viewer and my work. On the one hand, I want these ‘boundary-crossing’ works to make them think about the violence of common social sense and hierarchical order in
life. On the other hand, the production of the viewer’s unique subjectivity reinforces the animality in the language of painting.

Earlier this year, I watched Thai director Apichatpong Weerasethakul’s film Uncle Boonmee Who Can Recall His Past Lives (2010) at the ICA. It was an unforgettable moment. One of the episodes is when Boonmee is on his deathbed, and he leads his family into a cave in the jungle to tell of his past and future lives: “This cave, it’s like a womb, isn’t it? I was born here, and I can’t remember much about my past life. All I know is that I was born here. I don’t know if I’m a human being, animal, a woman, or a man.” This idea of man and animal transforming into each other through death and rebirth, with various alternating life forms, is not fiction but a fact. It helps me step out of anthropocentrism in my practice and think about the dialogue between subjects in painting from a more dynamic perspective. On the one hand, I would avoid the danger of my work falling into an imitation of representation, of being eaten by it; on the other hand, I am interested in the materiality of my own emotions and materials, how feelings are transmitted through the weight of the brush, the quality of the color, the contact of the canvas or paper, whether this process, which takes place in time, possesses spontaneity, how it reshapes my subjectivity. I hope that my practice will produce something unrecognizable. Not a copy, but an interruption and displacement, a distortion.

In We have mutual affinity (2019), I discuss the relationship of mutual empowerment, naming, control, and obedience between humans and non-human animals, especially pets, and see it as a metaphor for a heart-to-heart connection. I love you, and you love me means that we acknowledge each other and give each other the power to categorize and name ourselves. This
desire to have complete control over the other’s identity is undoubtedly a fixation, a refusal to acknowledge the possibility of the evolution of the Other’s identity. I see these plays about the dynamic transformation of power as a semi-autobiographical narrative based on my subjectivity and the evolution of my identity. Being a woman, queer and Asian in a normative social structure
has often made me feel reduced to an excluded and marginalized non-human animal.

I want to introduce more time and space into the paintings. Examples include diverse centers,
superimposed perspectives, and entangled points of view. Such an approach would mean that painting would evolve towards a more movement-based state. 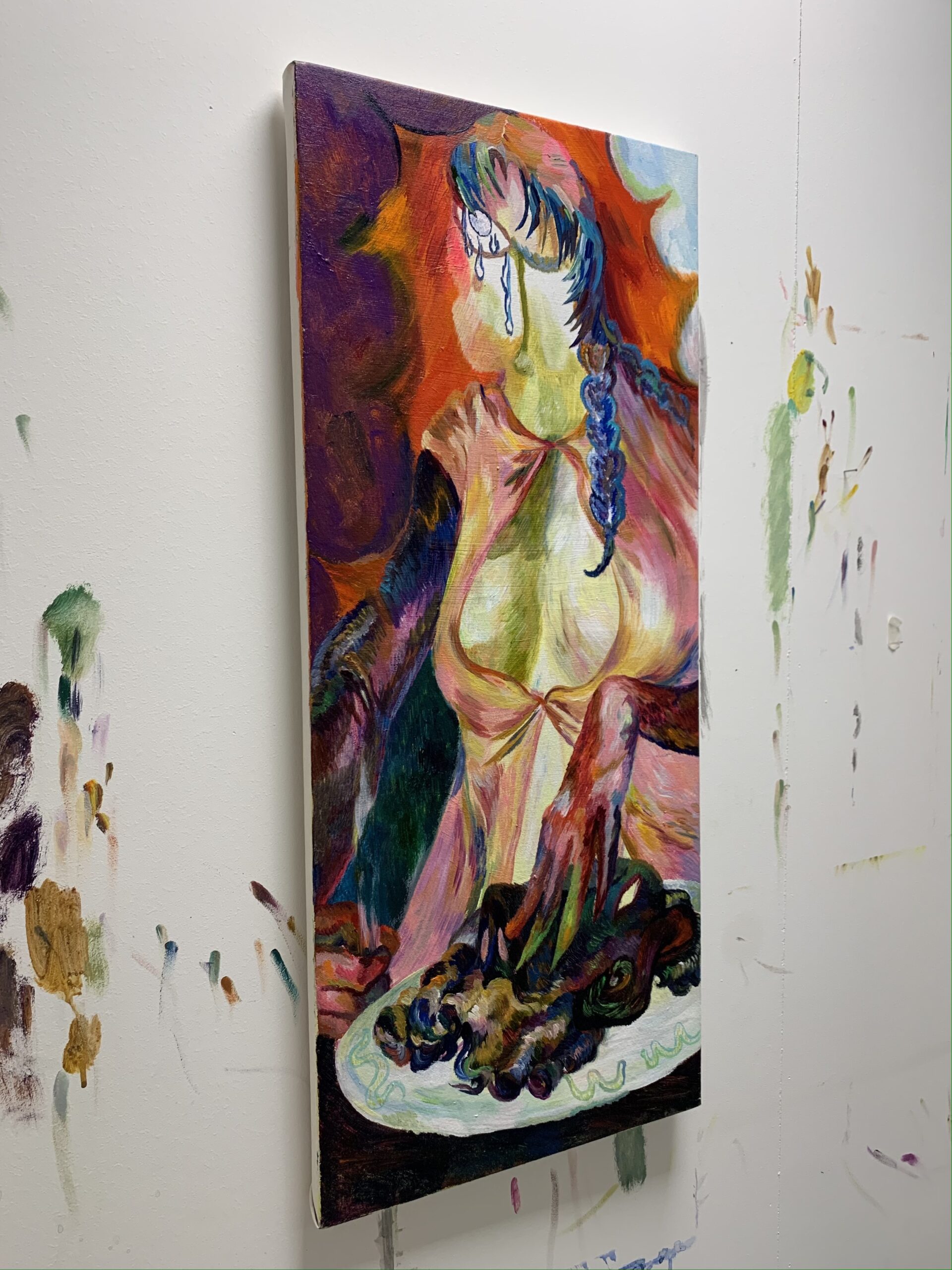