In the Studio with James Dearlove

In the studio with James Dearlove, whose ork presents a twilit, chimerical realm haunted by figures, animals and hybrids. We met with James to tell us more about growing up in Czechoslovakia, their greatest influences, and unexpected sources of inspiration.

I always wanted to be an artist. But when I left art school I got side tracked into a career as a television producer which lasted about fifteen years. About seven years ago I decided that if I didn’t focus on my passion for painting I never would. So I resigned from my TV job, found a studio in South London and started to paint.

I was born in Kenya. I’m British and currently live and work on the edge of Bodmin Moor in Cornwall, UK. My father was a diplomat so much of my upbringing was spent abroad or in boarding school. My very first memories are of living in Czechoslovakia during the seventies when it was under communist rule. It was a very difficult place to bring up a child and I feel some of the underlying disquietude in my work definitely stems from that time.

I think I have always been fascinated by the power of images to create an emotional response whether that be in art, film or performance. Perhaps that was why I ended up working in television. My mother tells me that when I was very little I saw in a Cathedral in Czechoslovakia a life-like, life-size painted wax sculpture of Jesus just having been taken down from the cross covered in the wounds of crucifixion. Apparently I was utterly traumatized by the sight of this religious sculpture and started screaming in horror and it took hours to calm me down and convince me that it was just a piece of art. I think there is a seed of my fascination with the power of an image in that moment! Over time painting became to symbolize for me the purest form of eliciting an emotional response and also the most artificial as well. A pivotal moment was watching a documentary by Warner Herzog called “Cave of Forgotten Dreams” about the cave paintings in the Chauvet Cave in Southern France. The cave contains some of the oldest human-painted images ever discovered and the documentary hints at what a primal and fundamental role painting plays in our attempts to define ourselves and our humanity. Or at least it hints at why someone like me (and my fellow painters) might become obsessed with painting! 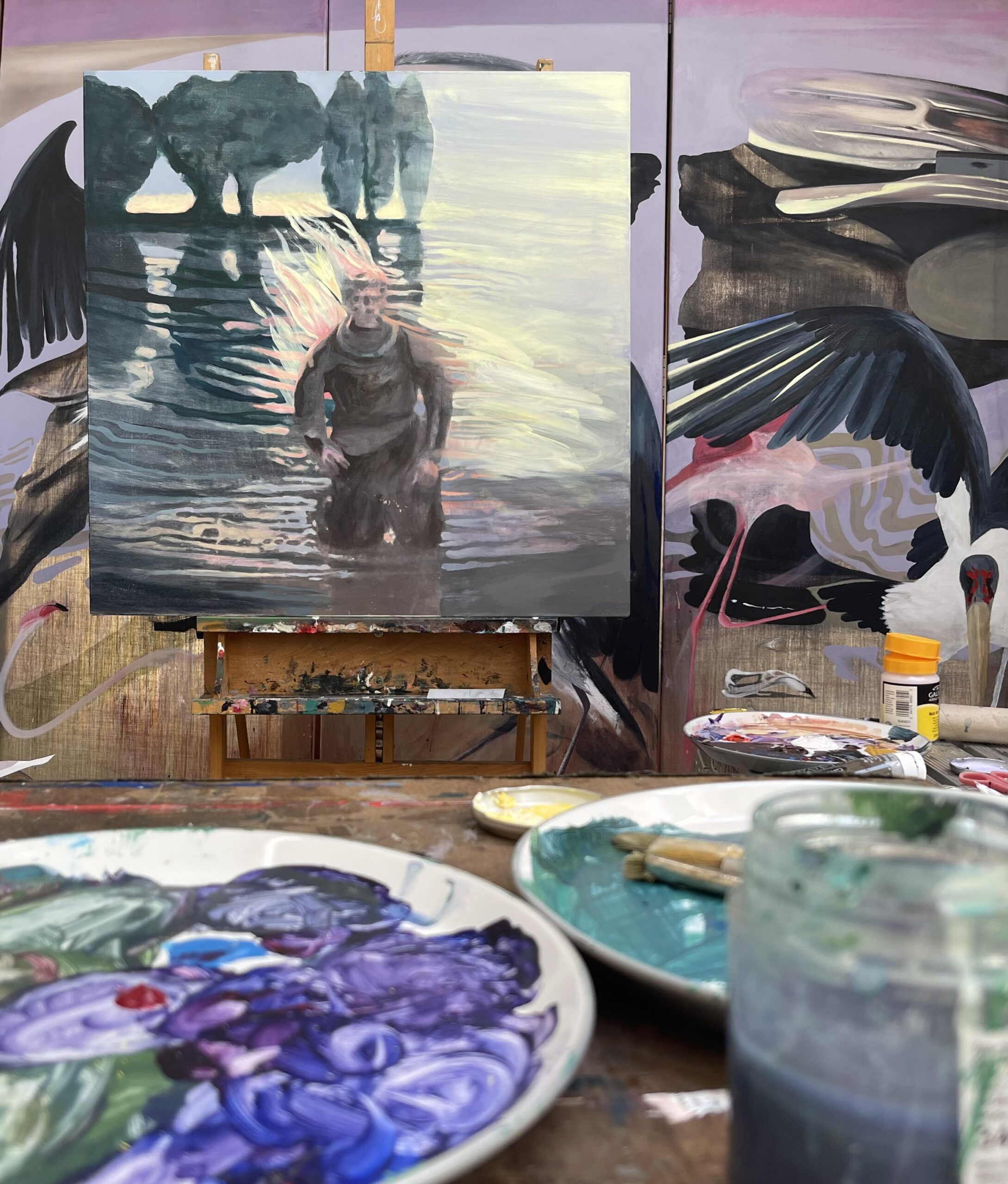 I am preoccupied with the human figure and seek to portray the beauty and desire I see in life but also the disquietude. My paintings may depict moments that are “beautiful” in some way or other but they are always shot through with an underlying sense of unease. This duality comes from various childhood memories (living behind the iron curtain, being sent to boarding school) but mainly from my experience as a queer man living and working both in the heart of the city and now in rural isolation. I paint a twilit, chimerical realm in which animals and flowers often make an appearance and this comes from my passion for the natural world and botany especially. 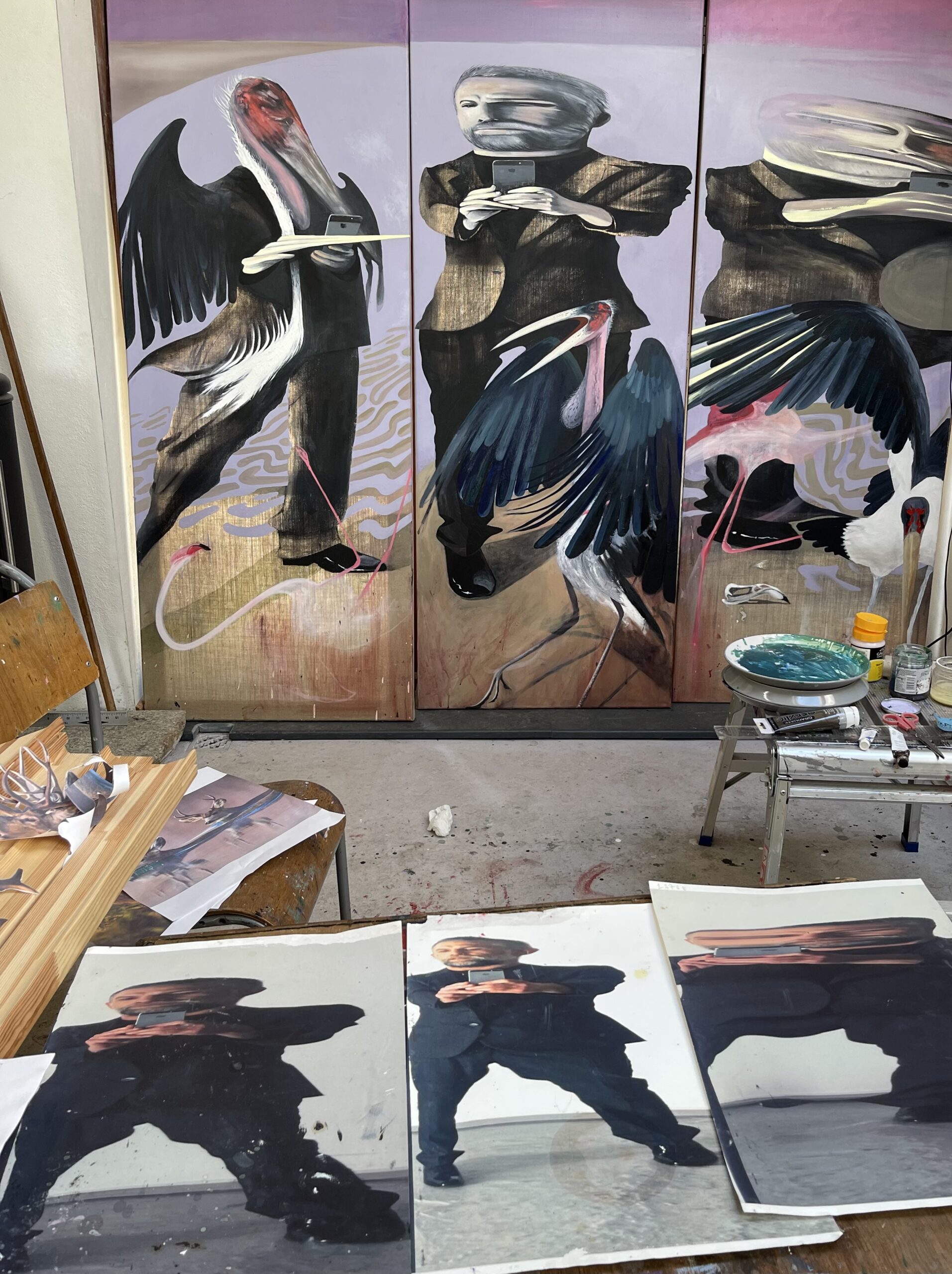 Francis Bacon has had a huge influence on me. Literature also influences my visual imagination a great deal too, for example William S Burrough’s novel “Cities of the Red Night”, Jean Genet’s plays, Samuel Beckett’s plays, and the poems of Stevie Smith.  Other painters  I admire include Yannis Tsarouchis, Neo Rausch, Louis Fratino, Paula Rego, Mohammed Sami and Dana Schutz.

I find the backgrounds and landscapes in video games fascinating and often very beautiful. 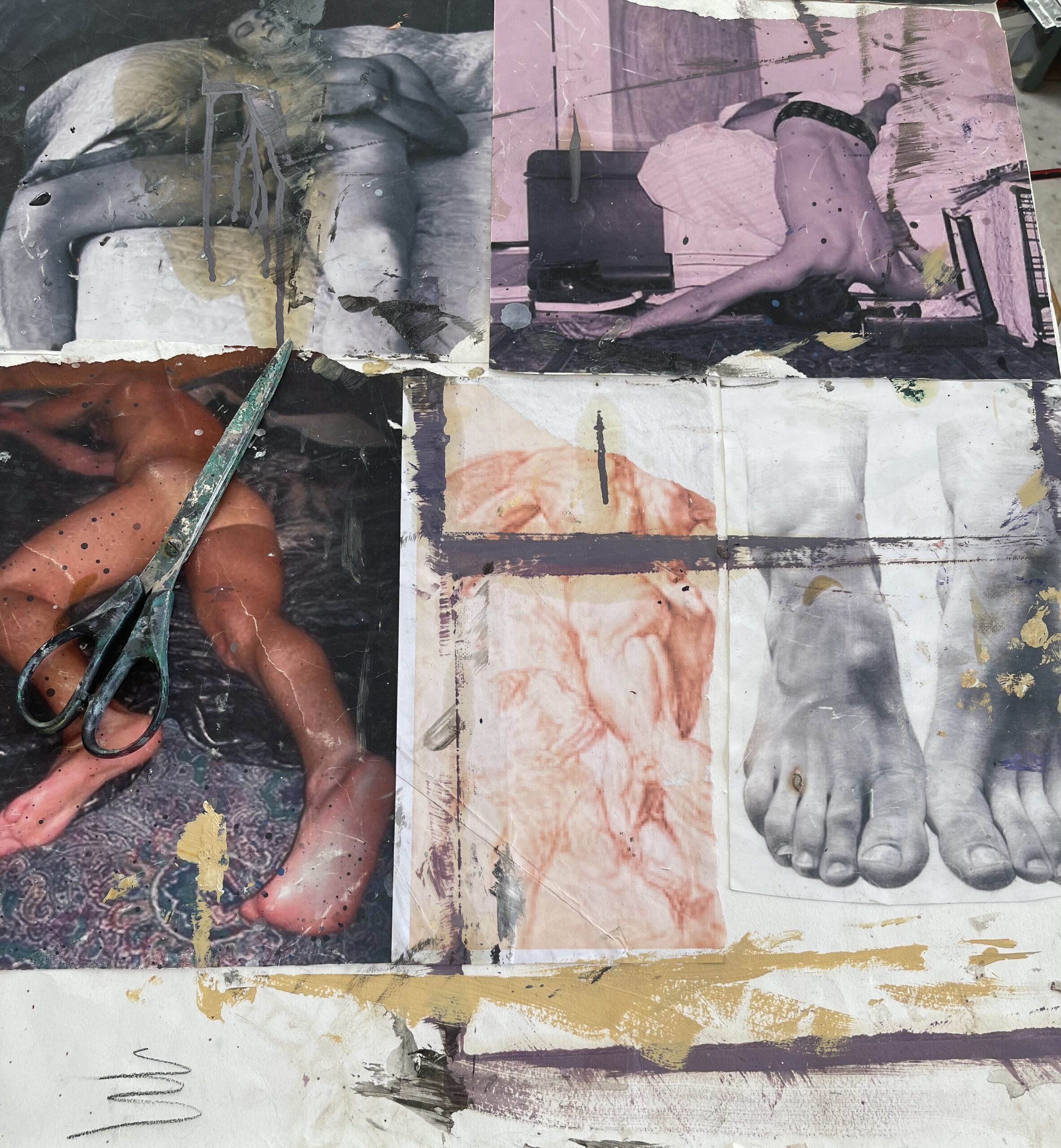 Franz Kafka said that “a book must be the axe for the frozen sea within us” and I believe that a painting should be that axe too! I don’t have a particular audience in mind when I make a painting.

In the past it has been travel that has mobilised change in my practise. I lived for a while in Mexico City and that definitely inspired a deep shift in the way I think about making an image. Living in New York for a year did the same thing. Both cities inspired new ways of seeing the world that are too numerous to list here but let’s just say that seeing graveyards strewn with orange marigolds and sugar skulls in Mexico City and being introduced to the films of John Waters in New York hint at how deeply travel has inspired my aesthetic.

Recently I won the Ingram Prize (in November 2021). This gave me a huge boost of confidence and validated my ongoing exploration of painting the figure. I am always questioning everything I do (not always in a productive way) winning a prestigious prize gave me a sense of being on the right track and that has mobilised my practise massively. I do experiment a lot; in fact my Ingram Prize winning painting “Figures on a Bed” was an experiment in its use of newspaper to paint on. Using the newspaper helped me shatter the image and get underneath the skin of the painting. 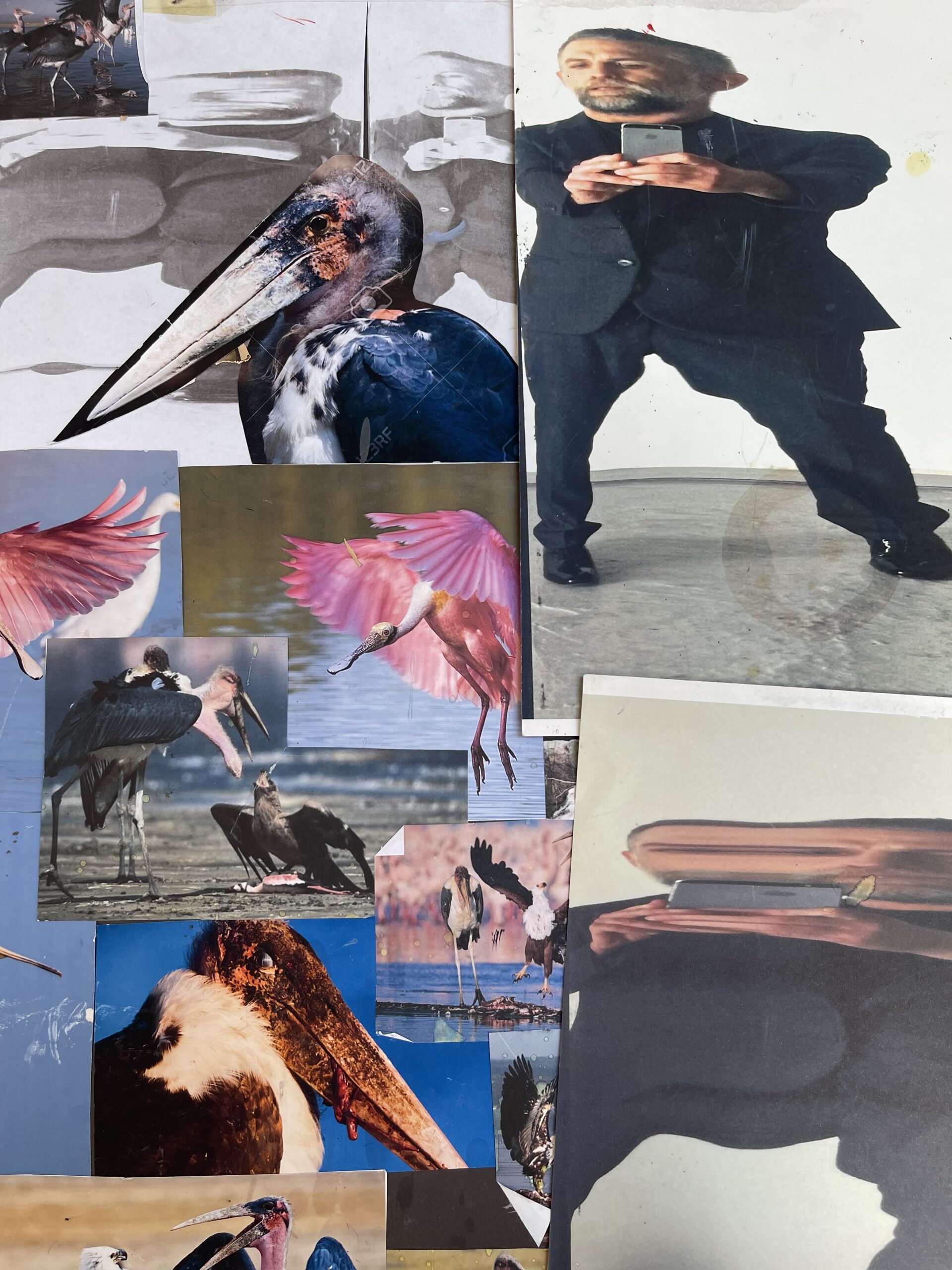 The best catalyst for me is to clear my mind and have faith that the painting will come. The less I worry and plan and “think” the better the end result tends to be.

“Soda Lake Landscape with Figures and Birds” was inspired by some pictures I took of myself in front of some fairground distortion mirrors. So the piece is really a self portrait. The mirrors may distort what I see but as I painted that I became interested in distortion and transformation on a deeper level. I hope that the birds (Marabou Storks and Flamingos) hint at what this more profound transfiguration might be. I chose these particular birds because they can be seen at Lake Nakura in Kenya and I was born in Kenya. Lake Nakuru is one of the famous Soda Lakes of the African Rift Valley and so that too felt like a wonderfully alien environment in which to set the metamorphosing figures and birds. As the piece is a self portrait I wanted to introduce my birthplace into the painting somehow. The Marabou Storks are also called Undertaker Birds and so for me the painting contains elements of birth and death.

I am fascinated by some of the techniques and processes of digital painting and would love to explore that. My main focus at the moment however is my continued exploration of how to paint the human figure. 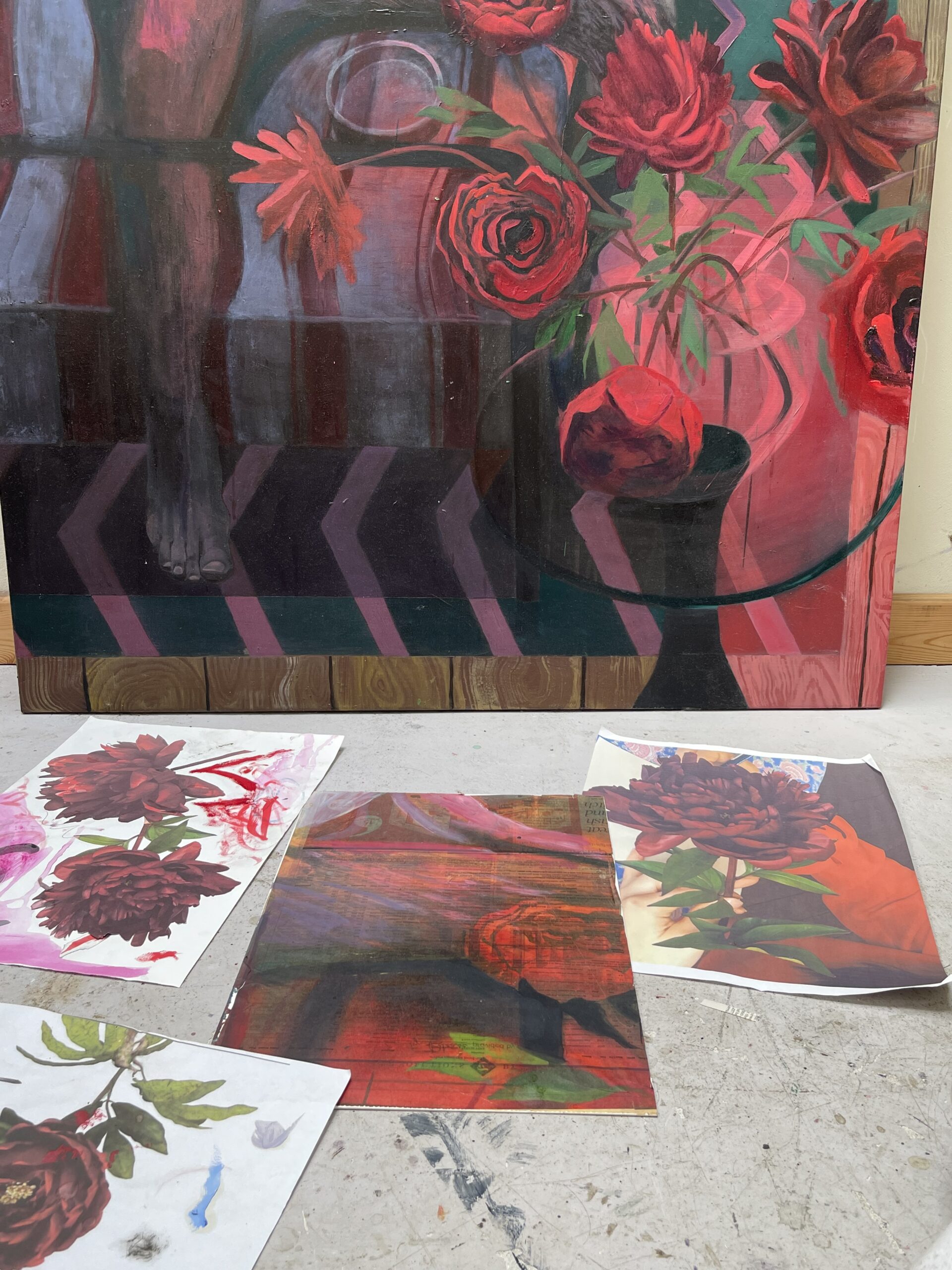