In the Studio with Anna Kay Sebastian

In the studio with Anna Kay Sebastian, a painter and draughtsman drawing on images from science fiction and myth. We met with Anna to tell us more about growing up in London Suburbs, her greatest influences, and unexpected sources of inspiration.

When I was very young. The role of an artist is strongly connected to the potential of the imagination. My earliest memory is to see darts of pure colour in the shape of boys and girls darting across my vision as the leftover trace of staring too long at a light bulb. You start to realise that you can craft this imaginary world that no one else can see, and then you develop the need to share it with others so they can see it/experience it too. That is how I started to see myself as an artist.

I am from the London suburbs, there was not much specifically exciting about my childhood, and this might be why the imagination became pivotal to my artistic development. My mother is Indian and my father white british. There is certainly the desire to reconcile these aspects of my identity. My Asian heritage was a strong presence within my early life but remained at a physical distance. I read a lot and watched alot of TV, I wanted to escape through images, my own or others. The images experienced though popular culture and an early fascination with oldmaster paintings, became entwined with my own identity and formed a structure for me to communicate. Still the format of a screen and the otherworldlyness it offers have found their symbolic form in my images. As a result, storytelling is an important aspect of my practice.

Paint us a picture of your artistic journey. What inspired you to first pursue, and then continue to practice, artistic work?

An artistic journey is not simple. It rarely offers immediate returns, it requires dedication to what is quite obscure in terms of the desires of wider society. I had wonderful teachers along the way. In my High School this was Janine Foakes (still an excellent teacher) Mark Yeomans and Susan Hodge (an art historian and superstar art writer). Besides that, I was driven by what interested me, and still am and finding means of visually representing events that impact me with perceptions beyond the reach of language. Art making has always been a means of having a conversation, and hopefully to touch someone.

In high school, under the guidance of Janine, I would paint ambitious sizes and scales motivated by teenage angst. The work was very confrontational and quite juvenile but expressed my investment in visual art beyond the requirements of school. I won prizes which to me, meant that there was a value in whatever it was I was painting, in contrast to the more banal and academic work of school.

The next shift would have been the death of my father. In the last year of my degree at Goldsmiths his death was a complete shock. I did not grieve well, instead I flipped my artistic practice, which became both a distraction from the deep level of grief that I wanted to avoid as well as a means of exploring themes of loss, death, memory and nostalgia. First, I wanted to hold onto memories of childhood which I previously took for granted, realising for the first time that forgetting him and allowing my father to be forgotten for others (regardless of whether they knew him or not)  would be another form of loss. But the memories I had, ignoring the finer details of who where and what, were not unusual, indeed generic. The tension between the general and the particular is now a constant theme of my work, in that I both acknowledge the homogenous nature of our lives within a contemporary Anglo/American society, but also because if our experiences are shared then the evocation of these memories in the viewer becomes a means by which they can enter the picture and have a personal relationship with it.

At the age of 25 I visited Haiti to take part in the Ghetto Biennale organised by photographer Leah Gordon and her then partner, Andre Eugene a Haitian sculptor living in the Grand Rue. This trip was really fundamental in terms of my artistic development. The extreme of life and death, the people I encountered, as well as the events which took place and the reasoning around them after would fuel my work and its themes after. It still does! Visiting a place and becoming friends with people so culturally different from myself and so trapped in the boundaries of their country, with a tragic and immensely difficult history posed many questions to me regarding sovereignty and religious expression. I had been brought up an atheist, and yet in Haiti I could feel the presence of forces that seemed to move and connect people quite acutely. Prior to this experience, my work had dealt with my personal grief, being in a place where the memory of a devastating earth quake and the constant approach of death from the immediate present was a lived possibly shook me out of my personal grief and led me to want to explore the collective understanding of sprits and death.

What’s the message of your work? How would you describe your aesthetic?

I dont think there can be a clear message to my work, precisely. I think its important for work to exist as a conversation with someone else, and each individual may have an entirely different experience (and how fantastic to have a conversation with that!). I am interested in various notions of the sacred from the perspective of the Renaissance, and the rise of Neoplatonism and how this might find relevance through image making today.

Who/what are your greatest influences?

Surrealism and Andre Breton, and writer and poet Daniel Miller, Leonor Fini and Leonor Carrington who I once attempted to evoke the ghost of. Ithell Colquhoun and Paula Rego. 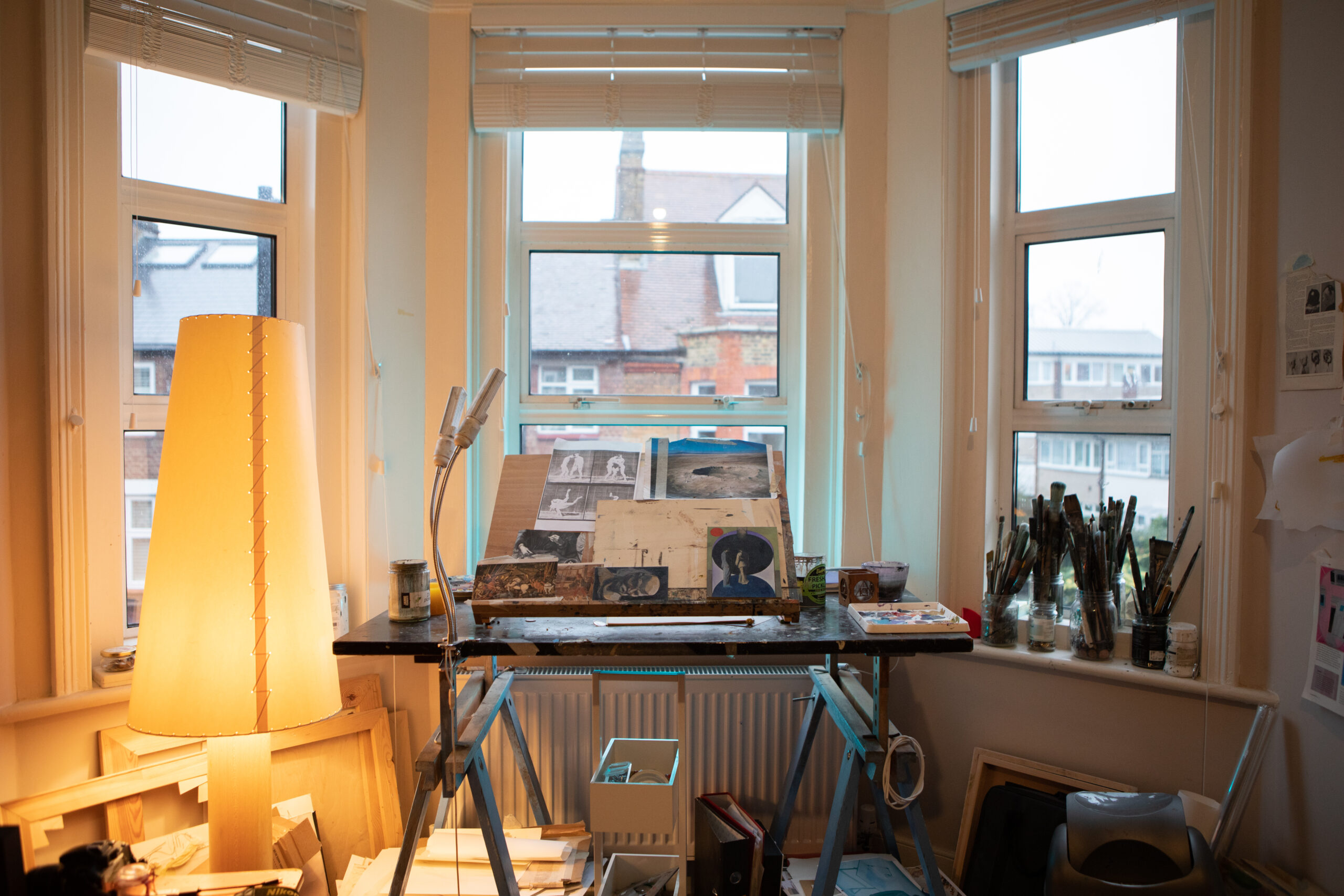 The possibility of touch through work is very important to me. I almost wrote transcendence as my answer, and it isnt so much this. I am interested in the sacred, for sure, but I see it as parallel to our everyday existence, which contains its moments of intensity, seemingly initiatic. So I would like to offer my viewer this kind of experience, a gateway elsewhere, through a correspondence between the familiar and the unfamiliar, their uncomfortable juxtaposition providing a fissure elsewhere, and nowhere in particular, except into their own mind and feelings.I recently read John Ashbury’s poem Self Portrait in a convex mirror, based on Parmigiano’s painting, self portrait in a convex mirror from the 15th century.  This poem expresses exactly the kind of relationship I wish someone to have seeing my image. I want them to feel soul in the painting. I want the image to appear to offer them an experience or reflection close to their own, and at the same time deny them its resolution, and so be forced to reconstruct their own memory and experience in relation to the memory and experience of my own.

What events in your life have mobilised change in your practise/aesthetic? How has your art evolved? Do you experiment?

Change in my work is catalysed by a change in environment, inbetween environments, the making of art becomes a process of memory. The first change is my education – Goldsmiths, the the Royal drawing school, giving me a groundwork and tools with which to reflect an experience of reality. The biggest change of all was the death of my father which led me to attempt to find a means of exploring trauma and loss and hang on to memories of childhood before they would be forgotten. There is a tendency to expect the present is eternity, and that nothing changes. As soon as it does radically change it forces a reflection, a disjunction between what was and can be. This was the process of grief.

The next shift would be my trip to Haiti for a month in 2015. It was another radical shift which branded my psyche and forced me to look very deeply into the nature of everyday reality.

The next change was a residency with the Royal Drawing School in 2019. Working with themes that had been a concern of my practice for the past 4 years, I responded directly to the beautiful landscape. The work I made on this residency was unapologetically indulgent.

Becoming a Hermit! Its important to me to close off from all distractions and live and breathe.